First Snow of the Season on Casper Mountain

Posted on September 26, 2009 by photobysherman

The evening of September 20 Casper had a hard rain and hail storm. It turned into a good soaking, all night. The late Summer rain was great. The next morning I was somewhat surprised to see that Casper Mountain had snow. I say somewhat because Wyoming can have snow anytime of the year, especially in the mountains.

I had thought about taking a drive on Casper Mountain this last day of Summer to check out if the Quaking Aspen leaves had started to turn yet. It was cloudy that morning with very little blue sky. I wasn’t too excited about taking pictures because I tend to like blue skies in my photos. Besides, I had several things to get done at home, so I postponed my mountain drive until later in the afternoon. I try to take pictures when I get the opportunity which is not necessarily the best time for taking good pictures. The best photo times are in the morning or in the evening because there is better light. I know this to be true, but if I waited for just those times, I’d never get any pictures.

By early afternoon my jobs at home were finished, and the sun was breaking through the clouds. Blue sky was beginning to show. Now I had time to drive up Casper Mountain, and it was an amazing drive, even though it was not considered the “best” time for photos. It was a convenient time for me. Fresh snow was hanging from pine boughs. The Spruce and Pines were dark green, and the best part was that the Quaking Aspen had begun to change. Their golden hue was very visible in amongst all the dark green of the forest which was laced with fluffy white snow.

Even the pines, blanketed in their first snow of the season contrasted against the sharp cliffs of Casper Mountain near Lookout Point, and were showing off for me.

Almost everywhere I looked, there were splashes of color bursting from the forest. In places, the Quakies were like flames of orange as they contrasted against the snow-covered timberland. Others were explosions of color detonating from the blanket of snow. 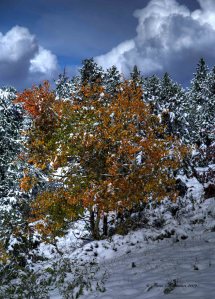 Gold in the Rocks 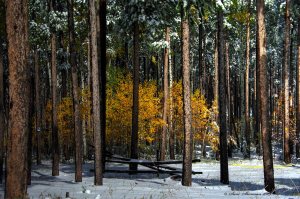 It was an amazing couple of hours of photography. I wouldn’t have even been on the mountain if I’d have decided to wait for the “right” time of early morning or late evening light. The time turned out to be the perfect time for me, even though it was not the traditional time for taking photographs. Consequently, I suggest photographers take pictures when they are able.

In a few days, I’ll have these pictures displayed at my photo store so that you can see them larger and framed. http://SamSherman.imagekind.com/

4 Responses to First Snow of the Season on Casper Mountain