The Road to Somewhere

Posted on March 6, 2012 by photobysherman

The adage goes something like this, “If you continue to do what you’ve always done, you’ll continue to get what you’ve always got”.  Maybe that’s my problem.  I keep doing the same thing and expecting different results.  Let me change my tactics by using “author’s license” and refashion that statement.  By using “author’s license” that’s just a nice way of having fun with someone else’s idea to fit what I want so I can write my article.  Here’s the way I would say it using “artist license”.   “If you continue to drive the same road, you’ll continue get to where you’ve always gone.”  Yep, I’m guilty.  I’ve driven the same road near Casper, Wyoming, sometimes several times a week for probably around 20 or more years.  I am not required to travel this road.  It was not the way to work or the grocery store or church or anyplace I need to go. No one held a gun to my head. I took this ride on my own accord in hopes of finding a world record Mule Deer buck to photograph. I haven’t taken that picture yet, but I continue to do what I’ve always done in hopes of photographing the great king buck.

This Fall and early Winter began like many other years I’ve traveled this short stretch of black asphalt at the base of Casper Mountain.  Dark, scattered patches of pine trees border part of this lane and some folks have their homes nearby.  Grasses, brush and willows cover  much of the mountain slope.  This time of year the shrubs are  naked of leaves but the gray brown stalks of their branches clump together to give deer both food and shelter. The wind keeps some vegetation blown clear of snow providing browse for deer.  In previous years I usually saw those wily critters off in the distance but rarely close enough for a great award winning photograph. In the past I have managed pictures of cute fawns and sweet looking doe and occasionally some average size bucks.

Things began to improve this Winter on my several drives.  During one drive I spotted a large buck laying in the brush not far off the pavement.  He had the largest set of antlers I could remember during my trips on this road. He ignored me and my car.  He was just laying scanning his territory keeping an eye out for potential danger.  Obviously he wasn’t concerned with insignificant me.  I knew if I tried to walk closer to him, he’d spook and high tail it out of the country.  I didn’t want to  unnecessarily  stress him as he needed to conserve his energy during this time of year.  Consequently I stayed at my car and managed to get some first-rate photographs by using my 2x teleconverter, my 18-250 mm zoom lens and leaned on the front of my car for support.  Finally, I was photographing a large deer and was close enough to to fill my camera frame with BUCK!!

Laying and ignoring me

For those of you unfamiliar, the 2x teleconverter doubles the focal length of a lens and is considered a poor photographer’s substitute for a real telephoto lens. I think that comes close to describing me.  The lens is placed between the lens and the camera body. Using the 2x, I cranked out my 18-250 mm lens to its max telephoto. That made it similar to using a 500 mm telephoto.  A solid tripod is helpful or if you don’t have one, the camera still needs to be braced. To steady the camera I leaned on the hood of the car and used my arms as a tripod.  I turned the engine off to prevent its idle from causing camera movement problems.  I might add, a 2x teleconverter requires twice a much additional light; therefore, another reason to hold steady is shooting at faster shutter speeds with this gadget is difficult.

After shooting way to many photographs, I was more inspired than ever as I drove away smiling with the buck still laying quietly and undisturbed. I knew I would return in the near future.  Maybe doing the same thing would actually bring different results.  It already had!!

Still motivated I made the drive on other day.  Amazingly, I  spotted some young bucks not to far off the road sparring with their antlers and trying to push each other around.  I’d never seen this before on this road or anywhere else.  My good luck this Winter was continuing.  They didn’t appear to be fighting for dominance and mating season was long over.  They were more like the 7th grade boys I used to teach.  Just pushing each other and goofing around trying to show they were tough.  Maybe they were practicing for another, more serious time during a future mating season?  It was amazing to just sit in my car, watch them, and take some pictures. This time I used the edge of the car window to brace my camera lens on.  I felt very fortunate to witness and photograph this miracle of nature.

Same road, a few days later, the turkeys were out.  No, not weird people, but real live wild turkeys…. Birds.  And the deer were out enjoying a stroll, too.  The turkeys didn’t seem to mind the company, but I think the deer might have had second thoughts or were at least curious as to what those feathery critters were all about.  Once again, just being there and watching and photographing was a special and fun experience. 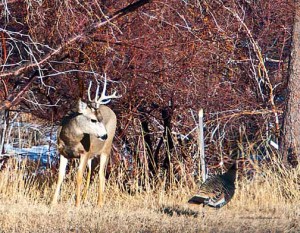 What are you doing in my world?

I seem to be throwing some kinks into that old saying, “If you continue to do what you’ve always done, you’ll continue to get what you’ve always got” or maybe there’s something to be said for consistency or perseverance or being stubborn. Don’t get me wrong, I think there is wisdom in being aware of doing the same thing and then wondering why the results don’t change, but that might not always be the best move in photography.  In this instance, I think of myself as more of an Edison. He tested over a 1000 different filaments before he came up with the right one for the incandescent light bulb. He persisted. No, I’m not an Edison.  Far from it but driving that same thoroughfare was just me being like a purposeful Edison. Instead of producing inventions, I have desired to create photographs. I am convinced I should continue to drive the road to somewhere.

My next article will be about amazing mule deer that are faster than a speeding bullet! More powerful than a locomotive! Able to leap tall buildings in a single bound!.  Look! Up in the sky! It’s a bird! It’s a plane! It’s …….!”   Or??  Well …. Maybe…..  Stay tuned for for my next article and discover the truth of flying deer…… No, not Rudolf.

Also please visit my web site at http://samsherman.imagekind.com/store/Images.aspx/b172e61a-f5e0-48b8-bc34-01507ac764d5/Wildlife for these and other wildlife photographs.  Skip back through the other galleries too.

4 Responses to The Road to Somewhere