Posted on March 4, 2013 by photobysherman

Didja ever  hear of the idea that each of us is a product of convergence?  Patrick F. McManus first introduced me to that term in one of his stories.  And of course I believe as gospel everything old Pat has ever written.  I’m sure he’d never stretch the truth or tell a lie.  Consequently let me tell you how convergence was the cause of me meeting the love of my life…. Chili cheese breakfast burritos.

According to McManus, convergence is a scientific fact. All important circumstances in one’s life happens by convergence. For instance, I am here in Casper because as I was completing my teaching degree at U.W. back during what must have been the time of Butch Cassidy, someone else here in Casper was completing a history teaching job.  The Casper person was preparing to move on to greener pastures. I was hoping to move on to any kind of pasture.  If he hadn’t moved on, there wouldn’t have been a pasture here in Casper for me to move to …. Consequently, convergence!!  Here I am.  If any other decisions had been made by either of us or the school district, I would have not ended in Casper.  Some of my future students might have cheered that, but they would be stuck with me anyway.

So what does convergence have to do with breakfast burritos? Bunches!  The universe seemed to conspire to bring me and a chili cheese breakfast burrito together.  I have finally been able to put this conspiracy theory together and can prove it.

I was enjoying a pleasant photography club trip to Kirwin, the old deserted gold mining ghost town high up in the Shoshone National Forest out of Meeteetsee, Wyoming. The weather was great.  The air smelled of pine and decayed buildings.  The old town was amazing, and I felt right at home.  Club photographers were wandering all over seemingly always getting in front of my camera just as I clicked the shutter.  But I was discrete.  As much as club members kept stepping into my camera’s field of vision,  I didn’t get a single picture of someone’s rear end.  Guess the members weren’t interested in derriere portraits.

Meanwhile, 30 miles down in the cowboy town of Meeteetsee, at the Silver Spur Bar and Grill, Maybel was preparing for tourists and locals who would soon be enjoying meals in her restaurant.  She was a short, scrawny, but plucky, older lady with white hair tied up in a bun on top of her head. She was well past middle age, but one knew not to mess with her as she’d probably be the first to slap you silly if you crossed her.  She was like Granny on ‘The Beverly Hillbillies’ but not as pretty.   Her apron was one of those that cooks wear, and it was probably white when it was new 30 years ago.  A cigarette hung from her lips, acrid smoke drifted up out of her nostrils almost hiding the no smoking sign.

In her kitchen Maybel kinda perked her head up as if getting a message from the universe and thought she ought to make sure she had plenty of her cast of burrito characters: flour tortillas, browned breakfast sausage, potatoes, cheese, eggs, chives, salsa, beans, plenty of beans, and chili. Plus whatever else she might want to throw in. She smiled as she thought of her huge Chili Cheese Breakfast Burrito that she served any time of the day.  She prided herself that very few customers could ever finish her masterpiece as it was so humongous.  Maybe today would be the day someone actually would buy one and finish it.  Noooo, that won’t happen…. But, well, she did have this funny feeling.  Maybe that was just the way her cigarette smoke tickled her nose.

Back up on the mountain at Kirwin, we were completing our photography, loading the cars and heading down with thoughts of dinner on our minds.  This club didn’t travel on wheels; it traveled on its stomach, and I was no exception.  Breakfast is my favorite meal and any time of the day is breakfast for me.  Eggs, bacon, potatoes, gravy, salsa.  It’s all good especially heaped on a large plate with side boards.

As we drove down the mountain enjoying the scenery, our club president informed us she had made reservations at the Silver Spur Bar and Grill.  Being a connoisseur of food, my stomach began to wander with thoughts of amazing delicacies already simmering on the grill just waiting for my taste buds.  Or maybe that was just the road dust drifting into the truck cab. 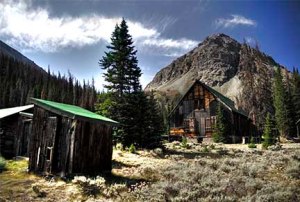 Meanwhile Maybel had heated her grill, dropped dollops of butter on it and briefly watched them simmer before throwing on burgers, bacon, eggs and other luscious, scrumptious, lip-smacking, high cholesterol, artery clogging sustenance as can be imagined. Her customers never lacked for potential heart attack material.   As these bits of nourishment smoldered, she began to imagine her favorite creation…. Her large, super duper Chili Cheese Breakfast Burrito.  Today might be her day and some unsuspecting customer’s day.  She began to arrange the necessary ingredients with a mysterious smile on her face.

The club members parked their vehicles outside the Silver Spur Bar and Grill.  I stepped out of the truck onto the ancient dirty brown board walk.  Took my hat off and wacked it against my trousers creating a small dust devil which swirled at my knees. As the powdered dirt billowed away, I envisioned outlaws and cattle barons as they tied their horses to the hitching rails.  Each sweating horse dipped its head and slurped dark cool water from the trough.

I put my hat back on and stepped into the Silver Spur and was immediately immersed into the decor of the bar. Mounted heads of local wildlife hung from the walls.  Boots and cowboy hats were suspended from the ceiling.  Posted in prominent places were red neck sayings.  The modern west in all its glory revealed itself to me.  That included the smell of cigarette smoke, grease, beer, and cowboys with manure on their boots.  Ah yes, small town Wyoming.  What a great place to satisfy my growing appetite plus enjoy the local culture of politically spirited ranchers discussing their government grazing rights as I read the anti-Obama signs hanging next to calendars portraying scantly clad ladies. Wyoming, like no place on earth!

As I scrutinized the menu I was seduced by this item: “Large Chili Cheese Breakfast Burrito.  Served all day.  So large no one can finish it. $15.99”. Mysteriously, the word ‘convergence‘ thundered silently through my head but not for long as this was a challenge I could not pass up.

I looked up into the old, bald waiter’s cold, blue eyes, noticed the deep wrinkles of his face as he smacked his thin lips holding a chew of tobacco between his gums and cheek. A little drop of tobacco juice started to drip off his lower lip, but before it did, he nonchalantly licked it off and asked, “whatcha want, fella?”

I pointed, “I want that”.  A smirk appeared on his lined face as he shook his head in approval or was that superciliousness as he hollered out, “Maybel, we got a live one here.  Get your extra large tortilla out of the barn.”   He asked, “do you want the chili with extra beans?”  My answer was, “of course.”  He walked off snickering, shaking his head and concealing a wicked smile.  A chill ran up my back.

When the old waiter placed my order with Maybel, she perked her head up again much like she had earlier in the day.  Smiling, she wiped her hands on her grungy, once white apron and walked out the door towards the barn to gather the ingredients she had already previously set aside in anticipation of such a momentous occasion.

Maybel’s wonderful Chili Cheese Breakfast Burrito was ready in a jiffy as if she’d been preparing it all day. The blob of a cheese-covered burrito spilled over the plate and even slopped over the side boards.  I wondered if Maybel had used a winch truck to load it on the plate. That giant tortilla was filled with several scrambled eggs, salsa, beans, onions, chunks of fried potatoes, cheese and avocado. It  was oozy and gooey all covered with scoops of red chili with extra beans all topped with sour cream.  A very delectable meal and all for me.  It was beautiful and smelled fantastic.  I fell in love once again.

Devouring this delectable creation was not a problem for me.  I did keep my knife handy in case someone tried to sneak a bite.  I warned them that if they tried for a taste, they’d pull back a bloody stump.  All I heard were things like, “my gawd!”, “what a pit”, “he must have a hollow leg”, “what a glutton”, “how can anyone put that much away?”, “incredible”, “how does he do it?”, “look at all those beans”.  I enjoyed each and every cholesterol shattering bite and just knew everyone was jealous.  It was an amazing meal.

After I had devoured every crumb, morsel, and sloppy drop of grease, Maybel strolled over, leaned in, dropped ashes from her cigarette on the table, and gave me a giant hug and mumbled congratulations in my ear. She seemed extremely pleased that I enjoyed her creation.  I told her she was the best cook. I woulda’ kissed her on the cheek, but that would have meant fighting through her cigarette.

After scrapping the plate clean and licking my lips, I began wondering what they had for dessert.  I closed my eyes and just sat and revisited my meeting with Maybel and recalled McManus and convergence while waiting on a large piece of chocolate cake with ice cream dessert.  The Chile Cheese Breakfast Burrito was no longer an item on my plate, but the memory lingered on.

Speaking of lingering, the beans were abundant and extra flavorful.  I would dream of my fantastic meal with extra chili and beans all the way back to Casper.

Which reminded me, “Oh, by the way, guys, (burping), who said they were going to ride with me back to Casper?”  No one raised their hands. Loud, deafening silence was all I heard.  They must have been still been in shock at the piece of artwork that had decorated my plate and weren’t thinking of riding home yet.

Disclaimer: Some names have been changed to protect the innocent.
Some persons appearing in this story might be figments of the writer’s imagination.

6 Responses to Convergence in Meeteetsee