Posted on July 8, 2009 by photobysherman

My son, Scott, took me to a place not far from his new house in North Idaho to take some pictures of an old barn.  As I was photographing the barn, I heard some strange screeching noises.  As I looked up, there was an Osprey nest with an Osprey peering down at me telling me I wasn’t wanted.  I didn’t want to disturb her any more but she flew off any way.  She swooped down and around me and scolded me to get out of there.

I thought I might as well make the most of the situation and get a photo of an Osprey in flight if I could quickly and then leave.  I knew I didn’t have time to change the settings on my 35 mm digital Pentax camera before she would be gone or at least more upset with me.   I quickly found her in my telephoto zoom lens and clicked my shutter. I took several before she was out of range,  most were not good.  I managed to take one picture I thought was acceptable which you can see below.  I was surprised any part of her was in focus much less her eyes.  But her head and eyes do seem to be in focus. When taking wildlife photos, it is best to have their eyes in focus.  I lucked out on this one. Her wings are blurred because I apparently still had my shutter speed set somewhat slow from photographing the barn.

The lesson I learned was to be prepared for any event when out photographing in outdoor areas.  You might not be totally ready for some very interesting photo situations.

I hope to upload some Idaho pictures to my gallery at http://SamSherman.imagekind.com/ next week.  In the meantime, feel free to go there and see what I have already. 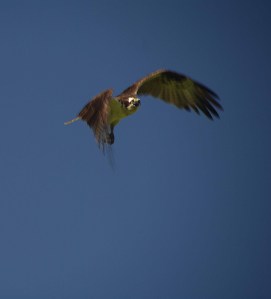