Back in early June the Casper Photography Club sponsored a photo scavenger hunt for its members.  We met for breakfast to determine the themes of the hunt and learn the rules.  One rule was that we could only take two pictures of each theme.  We picked 10 themes: low angle, triplets, water, wheels, selective focus, entrance, reflections, texture, wild things,  and lines.  We selected partners by drawing and then set out with our partner to accomplish our task of finding pictures to fit the themes.

Today I would like to discuss three of the themes: relections, entrance, and wild things.

After crossing the street, I noticed some large billowing clouds reflecting in the windows.  This was much more interesting.  It’s the one I entered in our scavenger hunt.  It won first place.

I felt these clouds made this picture better than the first.

Another theme was “wild things”.   I envisioned pictures of crazy people doing wild and fun things.  We couldn’t find anything like that as we drove around Casper but I’m sure if we looked long enough, we probably could.  What Casper does have is plenty of Antelope.  We found some of these critters out by Casper College.  They were accustomed to humans so let us drive up close to them.  I didn’t get out of the car as that would probably make them run.  I just took the pictures out of the car window.  Not an unusual thing around Casper.  My first picture included to much.  It’s ok to include more than one antelope but this first picture was not what I was looking for.

This picture shows to much and the animals are not in very photogenic positions.

My suggestion is to crop out.  Zoom in closer and simplify.  I found another Antelope with this group.  He was alone allowing me to simplify by zooming in closer. Once again I took the picture from the car window.  It’s a better photograph because of zooming in and simplifying.  This photograph won first place in the “wild thing” theme. 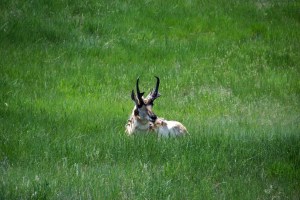 Move in and simplify.

One last theme for today is “entrance”.  This was a difficult theme to find.  Sure, there are lots of entrances around Casper but most aren’t real interesting.  We drove up to the Trails Center and found an interesting entrance.   Once again I zoomed in and simplified.  I cropped out a garbage can which would not add anything to the picture.  I liked the way the arches led the viewer into the picture.  The shadows of the windows added interest too.   This is one of those pictures I felt comfortable with and did not take another.  I thought it would work for the theme and could not be improved for the purposes of the scavenger hunt.  I was right. It won first place for the theme “entrance.”

Here’s another option my wife, Sandy, mentioned to me.  For a family of photographers or just those who have cameras, use the idea of a photo scavenger hunt as a family project.   Pick your own themes and rules.  Go for it. Give it a try.  If you do, let me know how it turned out.

Don’t forget to view my photo gallery at  http://SamSherman.imagekind.com/