Posted on March 7, 2010 by photobysherman

I’ve driven by the National Elk Refuge in Jackson Hole, Wyoming, many times.  Usually it’s the Summer and there are no elk in the refuge. They are all up in the high country getting fat on the forage available there.  In February I was in Jackson Hole, and  because it was winter, the elk were on the feed ground, so they could enjoy the  alfalfa pellets the refuge provides during the Winter.   The Casper Photography Association had planned this trip, and I was lucky enough to be able to go.  We rented a  horse drawn sleigh with driver for our group, loaded up, and away we went.  This was a dream I’d had since I was 15 years old and a new arrival in Wyoming.  My Aunt Rhea and and Uncle Herb told me about their trip in 1960 when they went on an Elk Refuge sleigh ride. Their trip was a time when the elk were actually fed hay from the sleighs.  Since their story of an enjoyable trip, I had always wanted to do the same thing.  My forty year dream was coming true, and now I also had my camera. 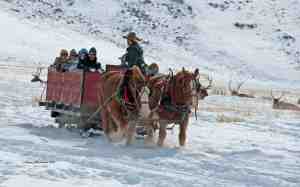 This was not our sleigh but we were on one just like it.

Draft horses which pulled our sleigh. I've always liked draft horses and these were beautiful animals that were well taken care of.

It was a beautiful February afternoon, not very cold, probably around 32 degrees. There was a light breeze but not so strong as to take the wind chill temperature down much below 25. My winter clothes did feel good, however.  The lighting was almost perfect for photography.  There were some high clouds which helped to diffuse the light.  The sun was at about a 45 degree angle.  This type of lighting would be helpful when we reached the elk.  It’s lighting much like you would see in a portrait studio.  The clouds and the snow on the ground would help diffuse the sunlight and bounce it into the any shadows. Without some diffusion, harsh shadows would be cast across the subject and that would not be conducive to good portrait photography.   I considered the elk my subjects for portraits, and the natural lighting and great setting my outdoor portrait studio.

The first wildlife we came across were a party of four coyotes.  Apparently, coyotes and wolves hang around the elk to feed.  We didn’t see any wolves but our sleigh driver told us there was a pack that drifted around looking for a meal.  The coyotes tended to feed on carrion.  These particular coyotes were not real worried about our sleigh. The sleigh driver told us if we were to get off the sleigh and walk, the coyotes would scatter to the hills.

Four coyotes were the first wildlife we saw up close in the refuge.

Zoom lenses are great to be able to get closer pictures of wildlife.

As we watched the coyotes, we noticed swans flying off in the distance.  They at first were white against the blue sky, but they were quickly lost to view as they flew with snow-covered hills as a background.  I kept my lens on them, and just for a brief time, they flew so they were highlighted against some distance pines.  They were in this position just long enough for me to get one camera click before they were once again lost against the snow covered hill. 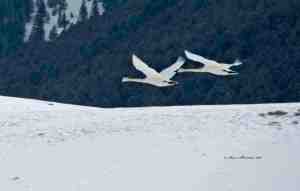 Swans are also common to the feed ground.

The driver also mentioned that if people were on foot in the refuge the elk would run off.  But, by being on the sleigh we were able to move in very close to the elk without frightening them.  We were taken into a group of bull elk.  I had never seen such large elk in one place.  They were beautiful and magnificent and very regal. 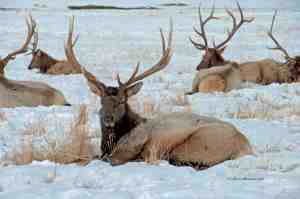 This was a group of large bull elk.

One regret is that I did not take a picture from a distance of the large herd.  I was just too amazed at the individuals.  Consequently, I took most of my portraits of individuals.  In these portrait type pictures you can see that there are no major shadows.  This is partly because of the high clouds creating diffused light.  The snow also helped to bounce the light into the shadow areas.  Consequently, harsh shadows were almost eliminated. 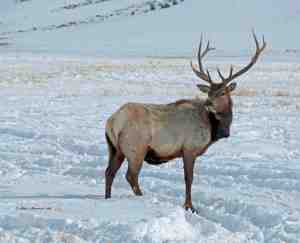 The diffused sunlight and bounced light off the snow allows the viewer to see better into the shadow cast over the elk's side.

The diffused sunlight and bounced light off the snow allows the viewer to see better into the shadow cast over the elk’s side.  I cheated a little more on these photos in that I did use PhotoShop Elements 6.0 to slightly lighten the shadows.

Most of the bull elk were not shy at all.  They did what they do all the time — eat, sleep, watch for predators, and fight.  Actually this was not the time of the year they did their hardest fighting, but they would challenge each other at least to show who was boss.  These “fights” didn’t last long as they seemed more interested in basking in the sun.

Our sojourn on the National Elk Refuge came to and end all too quickly. My elk portraiture was a very enjoyable and a worthwhile experience.  Many years ago when I first heard of sleigh rides on the Elk Refuge, I wasn’t much interested in photography.   I’m not necessarily glad I waited to visit the refuge until I was a camera buff, but my camera sure did help add to my dream of visiting the National Elk Refuge.

Please visit  my wildlife gallery to see these and other wildlife photographs.   http://samsherman.imagekind.com/store/Images.aspx/b172e61a-f5e0-48b8-bc34-01507ac764d5/Wildlife