Posted on August 4, 2010 by photobysherman

With all the snow and rain we have had this past Spring, I practiced taking waterfall pictures.  I’ve been especially interested in creating the look of those long, silky, smooth, wispy, blurred, white streams of water.  In May the Casper Photography Club took a trip to Spearfish Canyon in South Dakota.  The water was roaring through the canyon and consequently over the several falls in the canyon.  It turned out the photo club knew where to go to find fast water.

Roughlock Falls is a beautiful waterfall in Spearfish Canyon.  We parked in the parking lot and walked down an easy paved, shaded trail that had brown painted board rails most of the way.   I could hear the creek rushing by before I could see it.  Spearfish Creek is a typical mountain stream, clear, cold with lots of white water.

Waterfall photography can be accomplished with any camera but if you are interested in exploring different visions, the a 35mm with manual override is a good choice.  A zoom telephoto lens might also be helpful as you can zoom in or out and select a good composition.   As I arrived at the falls, I looked over the possibilities and began to mentally frame and compose photos in my mind.  I also know my camera and lens well enough that I can begin to visualize several scenes before I ever begin shooting.   I didn’t have a tripod so I used the railing to brace myself.  The first shots I just used the auto exposure/focus and zoomed to a pleasant composition by cropping.  The shade of the newly leafing trees also helped to keep the light from overwhelming the exposure.  I clicked the shutter button and viewed the monitor  to see what I’d gotten. Not bad with an  exposure was f/5.6 and 1/125 of a second.  The zoom lens was at 85 mm on my 18 – 250 zoom lens. I tried several shots using the auto setting just to get myself familiar with the light, the water movement and different compositions.  I like my digital 35 mm as I can shoot many pictures and not worry about running out of film. 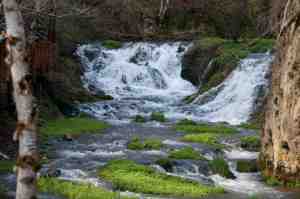 At 1/125th of a second, the water takes on more of a frozen in motion look.

This photo isn’t really what I had in mind.  I needed to experiment with my shutter speed so that the water would be more like long silky streaks.  1/125th of a second isn’t necessarily a fast shutter speed but was to fast for what I visualized as the motion of the water was to “frozen” looking.   My camera has a manual setting and I quickly changed to it.

I zoomed in on some whitewater and set my camera shutter speed to 1/45 of a second.  Then the aperture at f5.6 to have a properly exposed photo.  The results are below and I was still getting to much of the frozen water look but there was the beginning of that silky look that I envisioned. 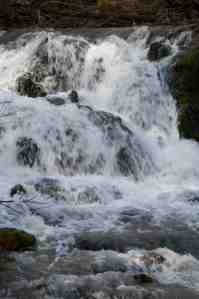 At 1/45th of a second the silky look was closer to what I envisioned.

More experimenting was needed. Scanning the creek and waterfall for a better scene, I once again reset the shutter speed to 1/4th of a second, the aperture to f/19 for a correct exposure and braced the camera with my arms, elbows on the rail, and released the shutter using the shutter button.  I should have used a cable release but had left it in my car.  The shake reduction function on my Pentax really does a great job fortunately.  After viewing the monitor, I thought this was closer to what I have envisioned.  After some cropping tweaks in Photoshop, below is my final picture. 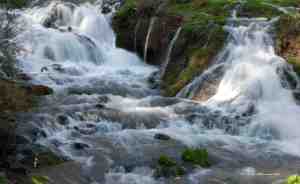 Once I had the technique down, Bridal Veil Falls was just as enjoyable to photograph as Roughlock Falls but I did less experimenting.  Unfortunately I did not have a tripod or rail to brace myself on so had to rely on holding the camera steady and the shake reduction feature of the camera as I did not bring my tripod on this trip.  My first attempt was once again to depend on the auto functions of the camera for focus and exposure. 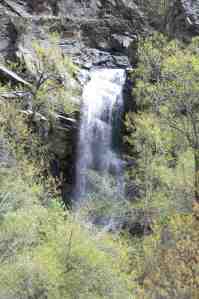 Shutter speed is the critical factor when shooting water and desiring that silky look.  Resetting to the manual function.  I reset the shutter to 1/4 second and set the aperture for correct exposure.  I hand held the camera and hoped I could hold the camera steady enough. 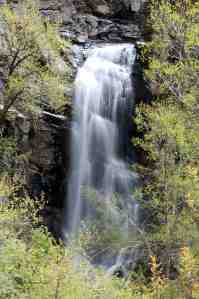 When shooting moving water pictures and you are looking for that silky, streaky view, shutter speed is the control to work with the most.  A faster shutter speed will tend to freeze the water action and if that’s what you want, use that faster shutter speed.  But if you are looking for a softer more silky view, set the shutter speed slower.  For me I like the 1/4th second setting.   I would suggest you use a tripod and a cable release however.  But when you don’t have either, try holding the camera steady and squeezing the shutter button carefully.  Photography is a wonderful experiment and trying different settings is part of the fun of photography.

Please send me your photography questions and I’ll try and answer them here on this blog.  Also, please take a look at some of my photos at http://samsherman.imagekind.com/